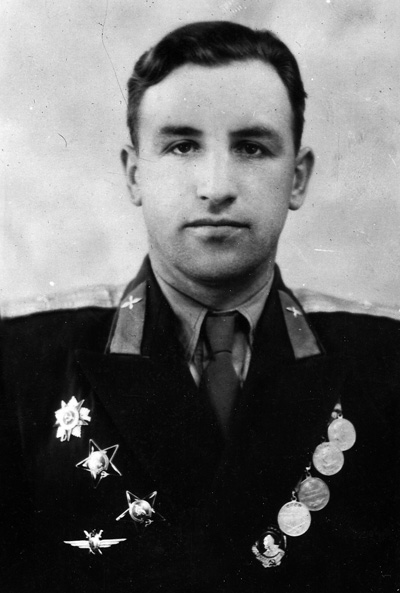 I, Alexey Sergeevich Shmonov, was born in 1923, in a town of Skopin of Ryazan Oblast. My father was a foreman of an assembly section of mining equipment factory, while mother was a housewife.
I received secondary education, and graduated from the high school right before the war broke out. When I studied at tenth grade instructors came from Skopin aeroclub to our school and talked to us. I got interested, and begun studying there.
Our aeroclub was attached to Bataisk aviation school, and that’s why at summer 1941 I was sent there through Voenkomat (Military commission responsible for draft and record keeping of draftees, enlisted personnel, and officers). Later, during rebasing, I got to Kirovobad flight school. 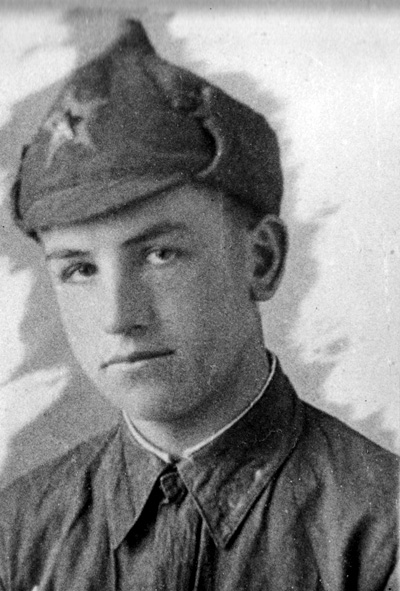 In the flight school

— Which planes did you fly in aero club?

— What did you study in the school?

Everything that pilot had to know. At one time there was an idea to use us as paratroopers at Caucasus, situation there was very difficult, so we were trained accordingly: we studied ground troops tactics, and we had an extensive parachute training. But later these plans were abandoned…
Which planes we had in the school? At first there was R-5. Then I made several flights in Pe-2. After that I started to fly an American Boston.
For the whole duration of my military service I flew Po-2, R-5, Pe-2, Boston, Tu-2, Il-28, Tu-16.
During war years I fought on Bostons only. For those days it was well equipped and it had nice handling characteristics. 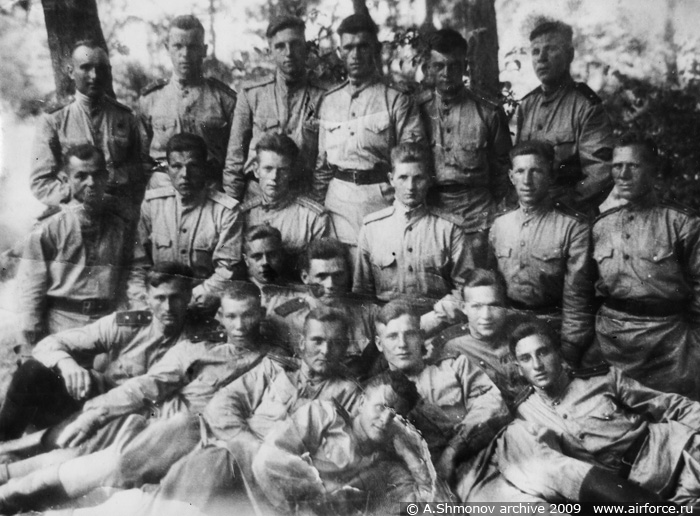 — Were there accidents or catastrophes while you trained?

While we trained everything was normal. Neither me, nor anybody else from my course had catastrophes, and I can’t recall any accidents either…

— What were the living conditions in the school and later at the front?

Barracks… During the war? What kind of living conditions we could get during war…
All kinds of buildings were turned into barracks, even dugouts, when we flew from the dirt strips.

At the front – well. We were fed in a stationary canteen, where breakfast, dinner and supper were served. There were waitresses, who were serving in BAO. Both food and service were good.

— Did you receive any training in ZAP?

I never was in ZAP. After I finished flight school in 1944 I was sent straight to the newly formed 408 BAP. At that time it was in Kostroma, being reformed from 765 NBAP,

which flew Po-2. Flight crews were training to fly Bostons type A-20G.
After Kostroma — Belorussia, then Poland… But I do not remember airfield names now.

— Who was your commander?

Regiment commander was Vladimir Ivanovich Solnyshkin, if I remember correctly.
I was assigned to the third squadron, under command of Senior Lieutenant Tarasov.

Crew consisted of four men. I remember my navigator – Mikhail Tebenkov. I can’t recall radio operator or gunner names, since they changed often.

I do not recall them. Besides, I never talked to special department officer. I was a simple pilot and had nothing to discuss with him. Commissar often came to us and talked to crew members… He was a good man.

— By the moment of your appearance in the regiment was there anybody who had previous combat experience?

Of course, there were those who fought on Po-2. According to them there were no big losses while flying Po-2.

— What guns were installed: American or Soviet?

12,7mm. Guns were Soviet-made.
Before airplanes reached combat units, they went through PARMs (Field Repare Units).
There could be quite significant changes applied, for example bomb hangers were not compatible with our bombs. And not only hangers were changed, but even navigators cabin was made in the nose. A-20G was made as a ground attack plane, so there was no front cockpit for navigator, it was replaced by gun mounts. They were rebuilt by our technicians back – that is, guns were removed and navigator cockpit was placed back (A standart A-20G had no place for navigator, which was required by Soviet bomber crews. To counter this problem, a field modification was made with a designation A-20DO. It meant that guns from the nose would be removed and a navigators cockpit would be placed instead. Other changes meant that defense armament would be changed to Soviet MGs, bomb hangers were also changed to Soviet ones).

— What kinds of missions did you regiment fly?

Our regiment was not used for precision bombing, more like semi-strategic. We bombed railway junctions, naval bases. Especially in Poland or Konigsberg.

— Which formations were used?

Mostly by squadron, we flew in formation of nine planes. At first I was a right wingman for the leader, then I became the most right wingman. On April 28th 1945 I was shot down by fighters from this position.

— How many times you were shot down?

My plane was shot down once, I had to make a forced landing on a belly. Second time I managed to bring damaged aircraft to the home base. But it was only damaged plane, not shot down. So, I was shot down only once.

— How exactly you were shot down?

We had accomplished our mission and were returning home, when German fighters attacked us. We simply missed that attack – lost situational awareness. Fighters approached from the rear and fired at us. In the gunners cabin radio operator was killed, the gunner was wounded. One engine was damaged, and control cables were torn… So I had to make a belly landing.

— How did you return?

I landed in the field controlled by our Cavalry Corps. A Po-2 came after me and brought me to the base…

— What was made to the plane?

It was blown up… Ammo and guns were dismantled, bombs were gone over the target. Cavalry men took something, ammunition, or, maybe they also took machine guns…

— What was a major threat for you, fighters or AAA?

Fighters, of course. AAA was also a threat, but fighters were a lot more dangerous. 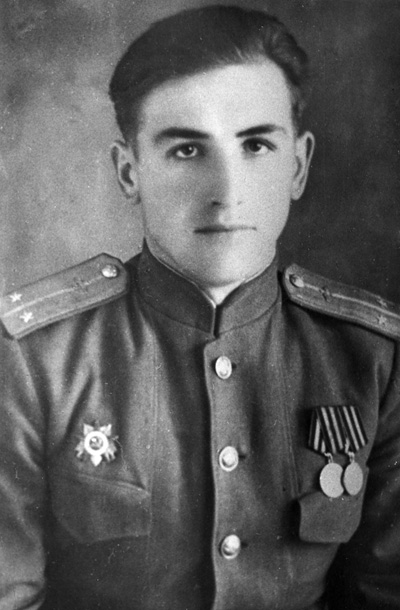 — What was your standard flight altitude?

Average altitudes usually were from two to four and a half thousand meters. It depended on the type of a target that we were going to bomb. Before bombing run we descended a bit.

— What was the farthest target you flew against?

Our targets were within 300 kilometers. Usually we flew at the speed of 450 km\h. Not in the straight line, so average flight lasted for about 2 hours.

— How many missions you flew per day?

No more then 2 flights per day. About six hours of flight time in the air.

— What could be called a combat mission?

Combat mission could be called if one accomplished his task — for example dropped bombs on the target.
If you came back with bombs, it was not accounted as a combat mission. Or if you did not reach assigned target.

— How bomb load was chosen? What kind of bombs did you use?

It could differ significantly, depending on target. Against personnel – small fragmentation bombs, against railway station — large caliber high explosive bombs or incendiary bombs.

— Did you use nose machine guns to strafe targets?

There were 2 machine guns. No, we did not use them.

— What can you say about effectiveness of you strikes?

Effectiveness was good, I think… especially good strike we made against shipping in Gdansk. We got positive reviews about our strikes (from ground troops).

— Do you remember any of your killed comrades?

I remember Anatolii Baluev, Lev Tyshler… Our regiment suffered a lot of losses in Poland. They also perished there.
(According to OBD Memorial: Baluev Anatoliy Afanasievich, pilot, Junior Leitenant, born in 1922, did not return from combat sortie on 16 April 1945.
Tyshler Lev Khatsielovich, flight navigator, Leytenat, born in 1916 was killed during combat sortie on 27 April 1945).

— Was there a fighter cover?

There was. There were not so many fighters to cover us. We usually had 2 pairs to cover us. They went above us and to the sides. As German fighters appeared, our escorts begun flying in “scissors ” above us.

— Did you get under bombing your self?

Yes, in 1941. In October Germans bombed our airfield… When I was at the front we were never bombed.

— Were there cases when our troops were hit by mistake?

As far as I know not in our regiment or division.

— Would the new pilots, who just came to the regiment, be sent straight into battle, or would they be trained in the regiment?

It was preferred to train them. First missions they flew against easy targets, then, as everybody else…

— Were there losses due to technical problems?

We lost one crew due to the technical problem. Engine failed, pilot was unable to fly normally and went into spin…

— Were there acts of cowardice?

Never heard in bomber aviation… There is no way you can show cowardice, we all fly in a formation. If you brake away – you may as well consider yourself shot down.

— Do you know any cases when gunners shot down enemy fighters?

We shot them down. A gunner from my crew shot one down…

— Were there HSUs in the regiment?

Not in our regiment.

— How effectiveness of the strike was documented?

Visually (photocontrol), if possible… There were airplanes equipped with cameras, which made pictures. There could be confirmation from the local population.

— Which characteristics of the planes pilots considered being most important?

Which characteristics? Most important was handling ability. Ease of handling. Stability in handling. And not to have a tendency to spin…

— For how long planes lasted? A month, two, or a year?

Each plane had a life time limit, but I have no idea what was the exact number. We did not change them till the end of the war. If an airplane was lost, then we got a replacement, of course.

— Was there any difference how Germans accomplished similar tasks? Better or worse?

— How would you describe enemy pilots?

They had both young and very experienced pilots… How to describe… There were better and worse. Same as we were.

— How did bomber tactics change during the war time?

Tactics changed as new planes with new capabilities appeared. More sophisticated planes appeared. Depending on the equipment of the plane the tactics of the bombers have changed. Boston was a powerful plane, and, for example, could carry twice as much bomb load as Pe-2, but couldn’t execute dive bombing.
What did not change was the formation – we kept flying in nines.

— Did you meet allies in the air or on the ground?

No, never saw them.

— Did you receive food or flight gear from allies?

In the school, when we were in the Transcaucasia area there was some food supply from Lend-Lease supplies. At the front everything was ours.

— Where and how did you meet Victory Day?

I met it in Germany. We were stationed at the field airstrip east of Oder River.
It was announced that the war is over. Everybody cheered, we started to celebrate… Then we were held in combat readiness for three days, because some garrisons of the islands in the North Sea refused to capitulate. Finally they also quit…

— How many missions did you fly?

Seventy three combat missions. My total time in the air for the duration of military service exceeded five thousand hours…

— Which awards did you receive and for which accomplishments? 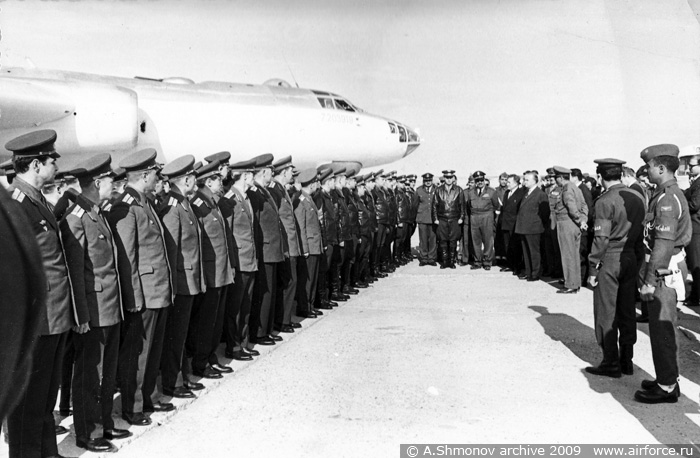 — What did you do after the war ended?

After the war ended I kept serving in the air force and continued flying until 1972. I reached a rank of Colonel and position of regiment commander. From this post I retired.
I served in Poland, then Western Ukraine. I was in Egypt twice. First time we participated in combat in 1962, that’s when I got awarded. Second time it was in 1969.

Interview with Hero of the Soviet Union Pavel...

The Unknown World War II in the Northern...

Interview with Hero of the Soviet Union Rostislav...

Interview with Aleksandr Vasylyevich Dudakov, Hero of the...